Clear communication is rare. It takes confidence, but not too much. It takes empathy, but you can’t shy away from difficult conversations. It can upset the office’s political landscape, or you might just be tired of spending all of your goodwill on conversations that fall on deaf ears. The consequences of bad communication in the workplace can bring organizations to their knees, making it that effort very worthwhile in the long run.

These are the signs your team needs to chat a bit more openly.

Miscommunication has very real and negative effects that can eat away at companies from the inside out. These real-world examples show exactly how it happens—and some will make you cringe. 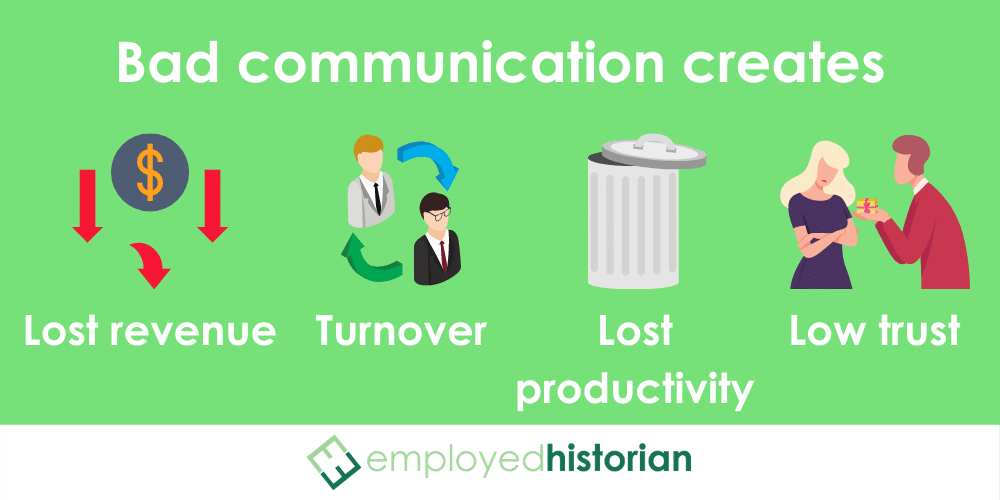 My first job as a textbook writer quickly became “my first job as a content marketing writer” because the owner of that company couldn’t decide what he wanted to do, and he wouldn’t (or couldn’t) convey any vision to the employees. He hired up to 15 people at one point, which was about 200% more employees than the company needed to fulfil its contracts.

Instead of finding new contracts, hiring a sales director, or even developing a marketing plan, he just stepped back from the company and let it hemorrhage money—his money—until it all crumbled.

He also insisted that the most experienced writers in the company create and teach a professional writing course for the rest of the company, on which more than $70,000 was spent—all to train employees that didn’t have anything to do in the first place. If he had communicated his vision for the company, those writers could have tried to acquire relevant skills instead of just twiddling their thumbs.

You see, those 10 extra employees he hired were paid roughly $25,000 USD per year, which worked out to around $250,000 in employee wages that didn’t contribute to revenue, product development, sales, marketing, or administration. Wasted revenue is one of the worst consequences of bad communication in the workplace, and it can kill a startup’s chances immediately.

That business owner wasn’t alone. According to the CEO of the Grossman Group, poor communication costs an average of $26,041 in lost productivity per employee every year.

My first agency job after 9 months of unemployment was a godsend for me as well as an incredible source of learning, but that agency had a turnover problem.

Here’s the thing: agencies are always more hectic than other office workplaces. People still left at an alarming rate. The company’s total head count numbered 12-15, but an average of 1-2 people left every month. 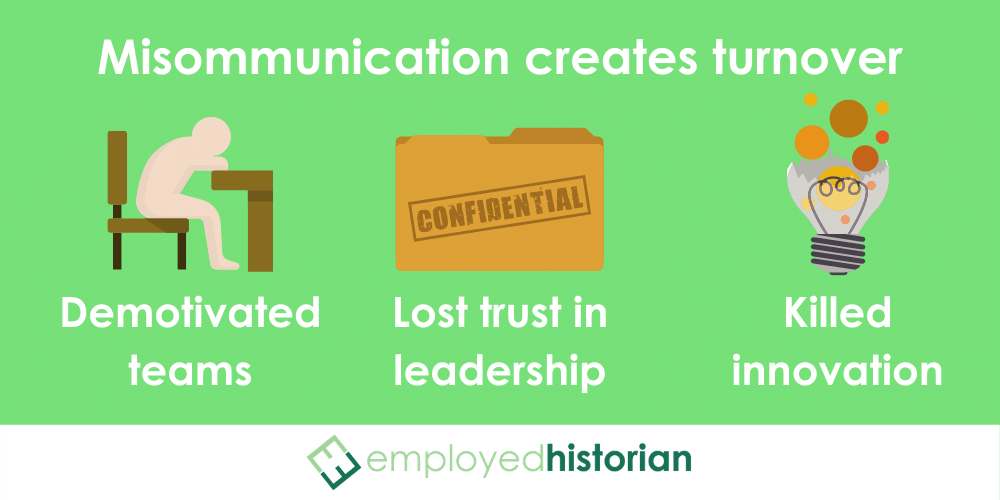 Why did so many people leave?

Turnover was one of several direct consequences of bad communication in the workplace, and it cut deeply into the agency’s ability to stay afloat. The amount of time and money that went into onboarding new employees became a permanent fixture on the balance sheet instead of occurring once every 6-10 months. That shouldn’t come as a surprise, since poor communication is the second-most powerful reason why employees quit their jobs.

Miscommunication leads to crossed wires, which is code for neither person understanding what the other meant, then acting out of sync or even tripping over each other.

A client I once worked with wanted a digital advertising campaign launched by the end of the week, which left 4-5 days to prepare the campaign. It would take a lot of work on short notice because that client had a tendency to request revisions on most ads.

Can you guess what happened next?

Spoiler alert: the ad campaign didn’t launch because we didn’t hear about it until 4 days later. The client had to delay the campaign by a week and missed the seasonal window to launch it. 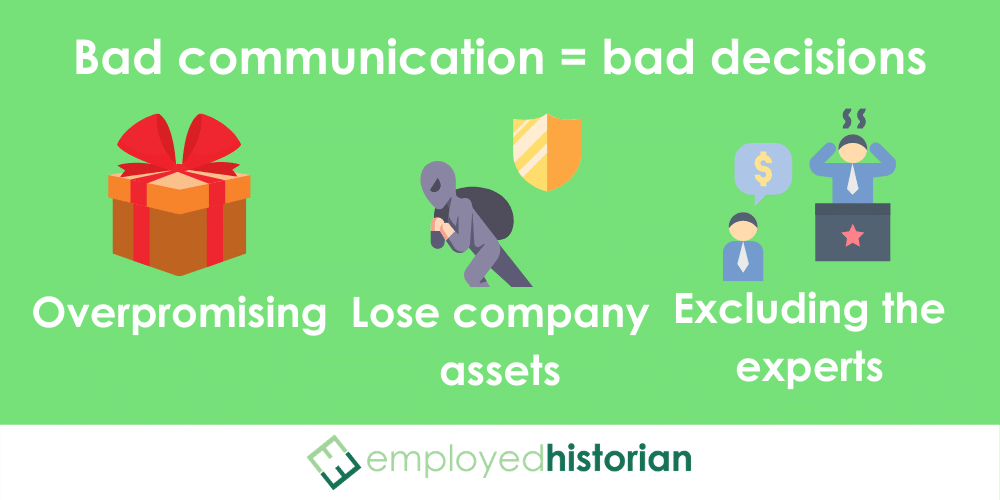 Another client of mine was approached by a salesperson who promised to generate leads for commission only. This sounded great to the client because they’d only pay when the revenue came in, making it a guaranteed return on investment.

That did sound great, but there was a huge flaw in the plan that would have made it a disaster caused by miscommunication.

This commission-only salesperson wanted some of our marketing materials to keep his own advertising “on-brand” with the client, and the client verbally agreed to share whatever he wanted. What did this mercenary salesperson want? Oh, just a carbon copy of our entire website with all 300 pages of content, premium images, and proprietary branding.

No big deal or anything, right?

I was flabbergasted. Clearly this sales agent was trying to pull a fast one on my client in order to walk away with our most competitive marketing asset. I’d had several past conversations about why we can’t give away our content (much less duplicate it), as it was the lifeblood of his website’s traffic (and sales, by extension—and the client had agreed to give this random person a copy of it, which I’d spent several years building. I pulled the client back from the ledge, but he would have destroyed his sales funnel and his entire business with it if I hadn’t intervened.

The best part? This client didn’t even loop me into the conversation. One of his own people mentioned it to another employee, who then asked me about it.

If the client had consulted the experts he was already paying in the first place, he would have known that this was a bad deal with “scam” written all over it. Instead, he kept the conversation hidden from everyone until after he’d already given a verbal agreement. There was even talk of a contract, but by a fluke he was delayed from signing it. 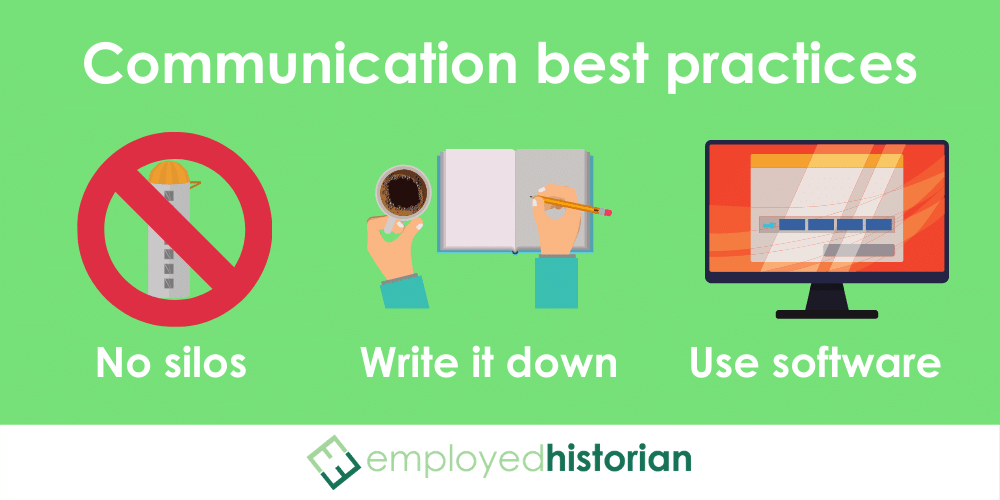 How to avoid miscommunication at work

We’ve covered the specific consequences of bad communication in the workplace, but that’s only half the equation. Follow these easy best practices to prevent yourself (and your team) from falling into disastrous situations like the ones above.

One of the worst things you can do for communication on a day-to-day basis is to keep your work correspondence relegated to an email chain. Yes, it’s great for sensitive conversations and one-on-one chats, but it becomes a detriment the moment you need to include a wider team.

Email becomes more exclusive as the size of your team (or project) grows:

Always leave a written record (even for yourself)

It’s SO important to create a written record of important conversations. So much correspondence happens through drop-in chats and passing conversations that you can’t possibly record it all.

However, you still need to record important project details, or anything that seems odd for these reasons:

Team-sized problems require team-sized solutions, plain and simple. Project management by email doesn’t work any better than by white board—especially since the pandemic started. You can’t just pop into someone’s office or roll your chair over to their desk for clarification.

It also doesn’t help that few people can write clearly or effectively. Together, distance and poor writing create a recipe for failure—on top of all the usual roadblocks you’ll encounter, like lazy co-workers and the confusion of large, multi-stage projects.

That’s where project management software comes in. It lets you avoid the consequences of bad communication in the workplace with these features:

I even use project management software for my own personal projects because it just makes everything easier to manage, even though I’m the only person who ever sees the notes.

You have some great options out there. I’ve used all four of these at one point or another and can confirm they get the job done:

That’s it! Neither you nor your team need to suffer the consequences of bad communication in the workplace. Communicate in groups, create a written record for everything important, and don’t be afraid to clarify anything. Keep correspondence in plain view and you’ll eliminate 50% of potential confusion right off the bat.

The importance of alumni associations for your career development

When I was desperately figuring out how to get a job in 2016, my experience with one particular alumni representative could only be described as...

END_OF_DOCUMENT_TOKEN_TO_BE_REPLACED 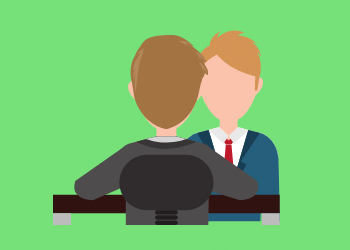 How to penetrate the hidden job market as a recent graduate

Figuring out how to penetrate the hidden job market is tough when you’re fresh out of college. You don’t have much of a network or that fabled...

END_OF_DOCUMENT_TOKEN_TO_BE_REPLACED 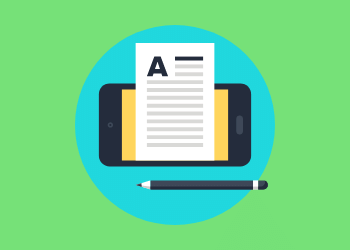 The best career counselling blogs to follow for grads

Most career advice out there is too generic to help you—but if you’re reading this then you probably knew that already. You’ve read about all the...

END_OF_DOCUMENT_TOKEN_TO_BE_REPLACED
We use cookies to ensure that we give you the best experience on our website. If you continue to use this site we will assume that you are happy with it. For more information, visit: https://employedhistorian.com/cookie-policy/Ok