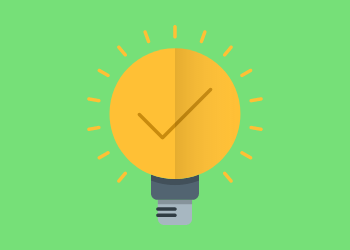 Do learning and development strategy have to cost efficiency?

An old boss of mine was all about time management. He tried to make it his leadership shtick,  even handing out a little self-published 60-page book from the ’80s. It was as bad as it sounds. He referenced it all the time, frequently repeating these two mantras:

It sounded like an enlightened mindset for a learning and development strategy until you tried to put both mantras both into practice at once. Under his management style, these two values were constantly in conflict.

Employees could never fulfill their jobs with 100% efficiency because they lacked specialized skills (the CEO hired that way intentionally, as he later told me), yet they could never acquire those skills because that same CEO created a fear of spending “overhead” time on learning. He wouldn’t even send us to training sessions or networking events to grow the business with all that spare time.

The truth is that you can’t have both of these things in the short-term. A company’s long-term viability to compete depends on the growth of its team. Maximizing revenue today means paying the opportunity cost of higher revenue in the future, but there is a payoff when companies invest in long-term training (especially in the services industry).

My boss wasn’t willing to pay the opportunity cost of missing out on cheap hourly work in order to earn higher rates in the future. He charged clients around $40 per hour, but only paid employees $15 per hour. After taxes and overhead, that was roughly a profit margin of $17 per hour. Not bad, right?

But it could have been higher.

Kicker #1: He hired people at 2-3 times the rate of contracts he brought into the company, so most employees had a lot of spare time they could have spent acquiring new skills for the company, anyway. He was paying them to do nothing, but also wouldn’t let them spend time on anything other than billable projects. 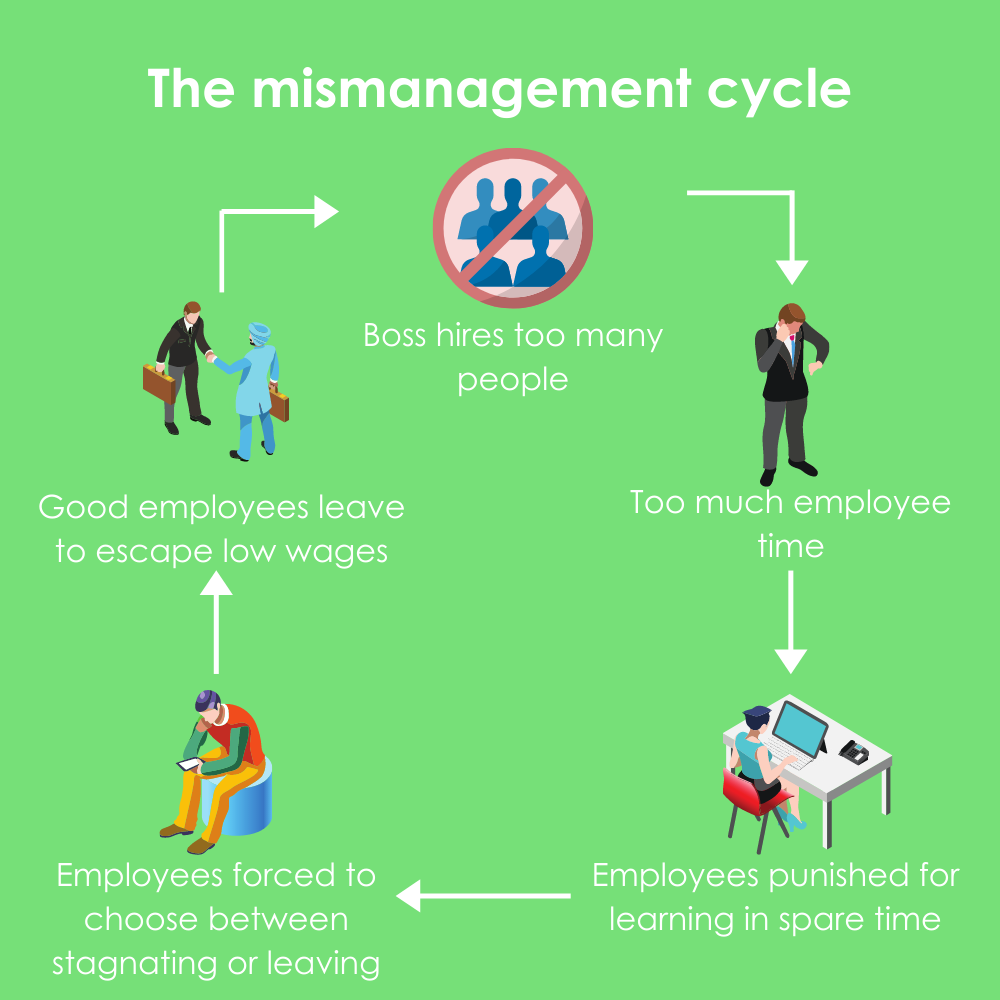 What’s the ROI of a learning and development strategy?

Our office would have lost out on a bit of short-term revenue, but we weren’t making much anyway. What are a few hours of overhead at $15 per hour against the opportunity to learn a new set of skills that would let us charge $80 per hour across the whole company?

In this case, my old boss could have doubled the company’s hourly billable income from $40 to $80 and still been on the medium-low end of the industry’s pricing spectrum. That would have doubled his revenue per hour and, even after investing in training and the software needed, would have nearly quadrupled his profit margin per hour.

But he wouldn’t go for it.

Training adults in the workplace isn’t that difficult, especially with all of the online training technology available these days. We could have invested training in:

However, he just wouldn’t give up the low-paying work. It showed.

My boss had trouble landing long-term contracts worth more than $30 per hour. Yet those of us who did put time into practicing our writing skills and acquiring marketing experience were able to earn one or two contracts that paid $60 per hour, making it well worth the investment (in our eyes).

Those $60-per-hour jobs were just the tip of the iceberg, too. I know an experienced copywriting consultant who charges $150 per hour, as well as a digital marketing CEO who charges $120 per hour.

I’ve personally worked on freelance projects charging $80 per hour in the same industry with less than 5 years of experience at the time, so I can verify that it’s possible to grow revenue with a decent learning and development strategy. 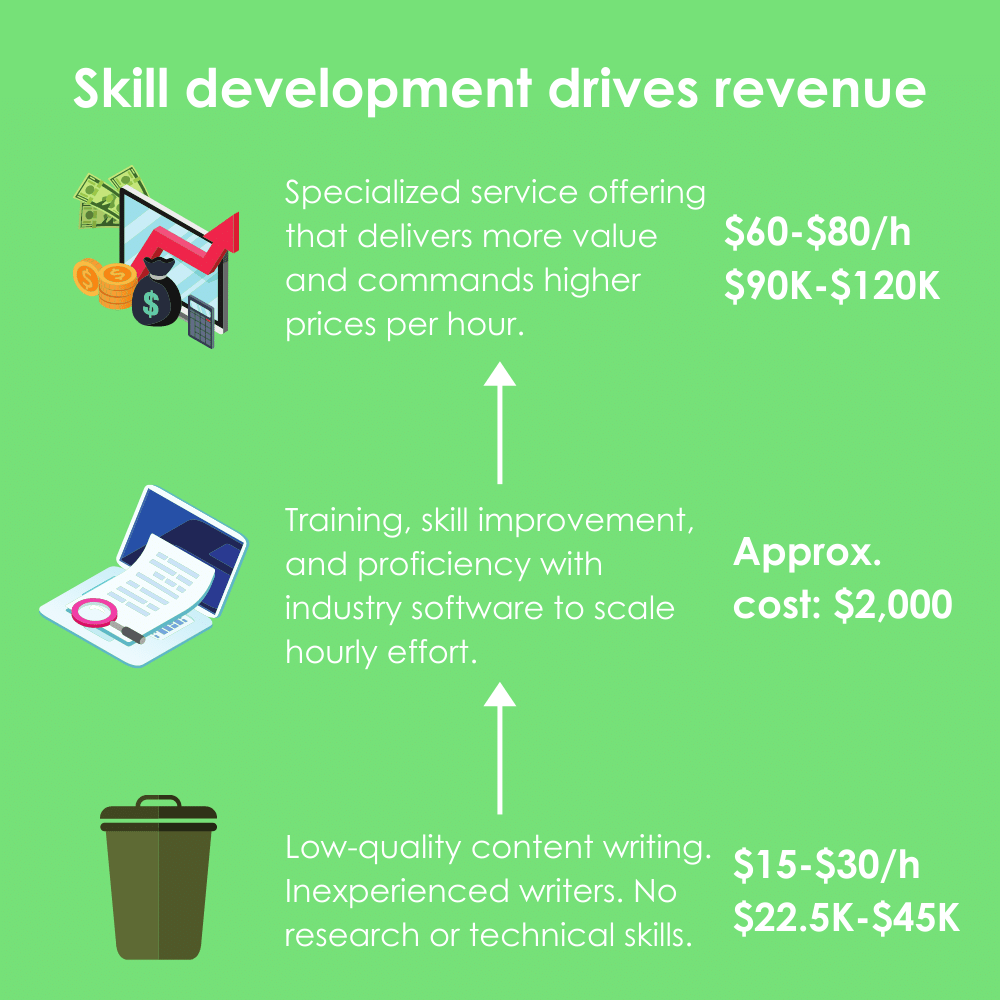 There are other benefits to to implementing a learning and development strategy, according to Southern New Hampshire University:

Revenue is the purpose of skills development

Learning is earning—or pretty close, anyway. Investing in employee growth does take time and money away from revenue a company could earn today, but if that company invest those resources wisely then it will see higher rates of return down the road. On a conceptual level it’s just like investing, except the capital is in talent and processes rather than the market.

Eventually, I convinced the boss to let our social media manager dedicate an hour and a half per week toward learning new software-centric skills, but he wanted her to do it in the form of reading generic blogs meant for first-timers, and only in intervals of 15 minutes per day.

It worked about as well as you’d think.

Kicker #2: This old boss was a career venture capitalist, so the core part of his job was, in fact, to evaluate teams and invest money in their growth for higher revenue down the road. He still wouldn’t invest in skill development at his own company.

It’s methodical and contextual. Individuals need to put time into finding solutions to real challenges that the business faces now or will face in the future, and there’s no shortcut.

I’ve long since moved on toward and beyond more established marketing roles where I picked up an entire toolbox of new skills, and I can honestly say that those extra skills are the gateway to delivering higher value.

And with higher value comes higher pricing plus other revenue-feeding benefits, such as:

That’s why I can charge hourly rates as a consultant that doubles the hourly wage of my current position (as of writing).

My consulting wage today is more than five times what I made per hour in that first job as a direct result of investing time into my own skill development. You can bet that wouldn’t have happened if I had continued to write hollow $20 articles for the rest of my life.

Managers and team leaders need to set aside downtime for skill development to remain competitive.

Case in point: Google employees in the Mountain View campus are known to be given 20% of their time to pursue new projects of their own interest, if they wish. Google is the world’s fourth-largest company in the world, so it might be a nuggets of wisdom worth following.

Not a bad way to grow a business.