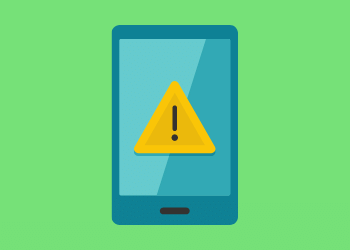 Should you be afraid of recording private conversations at work?

We all need to let off steam about work—some of us more than others. We’ve all been guilty of it because it’s natural, especially in a workplace culture that’s even moderately toxic (I’ve been there more than once). But what if someone reads your messages? It’s actually prudent to be cautions of recording private conversations at work, because a bad reference from a boss who has read your messages can prevent you from finding a job.

It’s probably fine if in a face-to-face conversation in your backyard or a private restaurant table, but we all know conversations happen through our phones and inboxes more frequently than in person these days. That goes double since the pandemic started, and it could pose a real risk to your relationship with your employer if old, unsavory statements were found.

And that’s where the danger tends to lie, these days.

Depending on the device or the software you use to communicate, your boss may actually be able to read your private messages. These are the ways your boss could be recording your private conversations at work, as well as what to do about it.

No. Generally speaking, your work emails are not private. The only exception is if your employer expects you to bring your own device and use your personal email address for work.

Otherwise, assume that you’re leaving a paper trail of everything that leaves and enters your inbox, including notes or unfinished drafts sitting in your mailbox.

If your workplace uses any of these email clients, then your emails can definitely be monitored:

That’s not an exhaustive list, and it might not even matter if you’re using a work-owned device. Employers can still purchase monitoring software that records screens, keyboard strokes, internet searches, and “active” time.

There are even pages comparing this kind of software from well-known media outlets.

It’s all on the same internet connection at work. 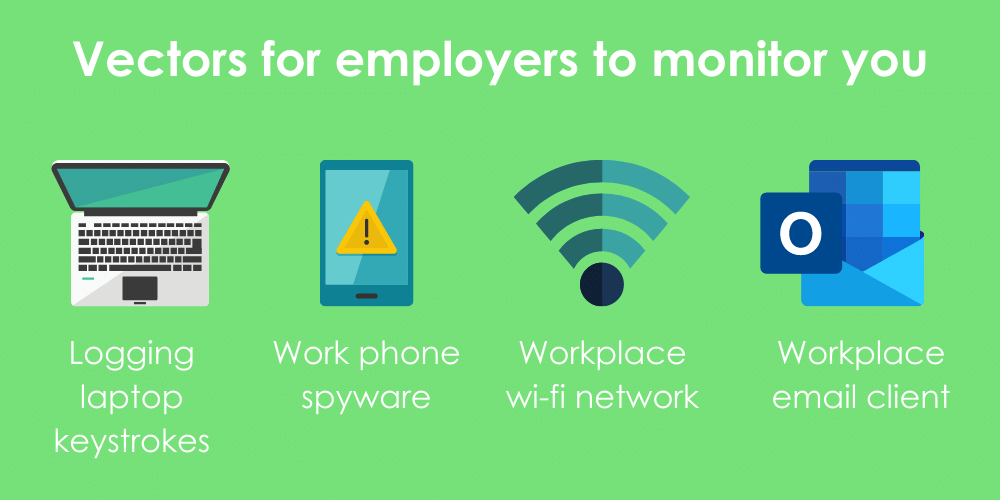 Is your boss recording private conversations at work on Slack?

If you’re using a company Slack channel, then your employer can record it. Slack built its early reputation on secure communication, even on the free plan, but that’s kind of misleading.

Here’s the thing: Slack takes a pretty hands-off approach with control of data. Employers paying for plans own the data, and Slack just expects that those employers will play nice and abide by laws of their state, province, or country.

It is possible to get away with private Slack messages if you use an account that you own on a device that you own.

This is the million-dollar question, isn’t it? Slack messages are partially encrypted but not entirely. Employers are still capable of recording private conversations at work (or even remotely) if they own the Slack channel.

The difference lies in the type of encryption that Slack does and doesn’t use:

So what’s “end-to-end encryption,” then? It would encrypt data without being decrypted on its stop by the Slack servers, if Slack offered it as a service. Instead, Slack offers employers “control of their data” as a feature of its enterprise plans, letting employers read employees’ slack messages.

Slack does that by encrypting messages at rest and in transit, then decrypting them once messages pass through its servers in between the people sending and receiving them. Mercifully, Slack messages will still be encrypted at rest and in transit, meaning that messages are still encrypted while travelling through an employer’s network. Again, just make sure you’re using your own device and your own Slack account. It also helps if the person receiving the messages does the same. 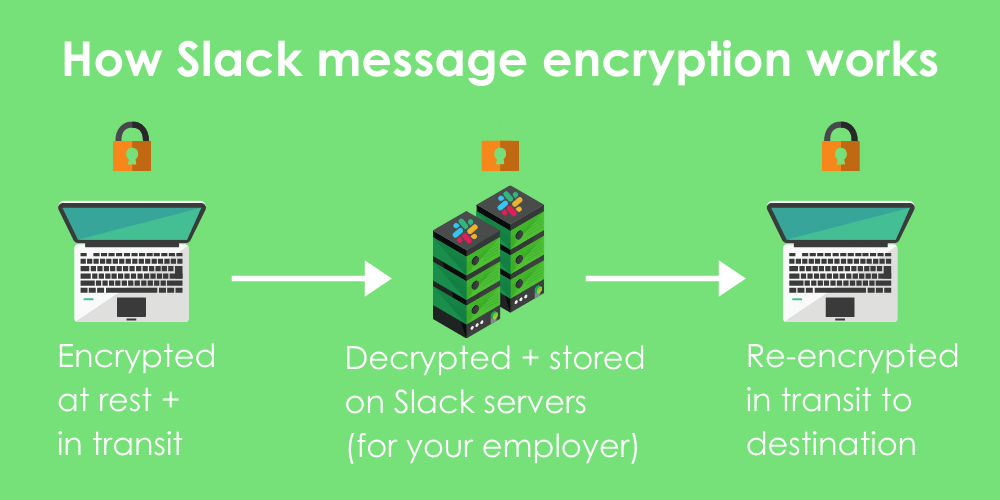 Can your boss read your Skype messages?

Employers can’t track your message history on the free version of Skype—not within the app itself, anyway.

Remember that employers can still track web activity through logging keystrokes on company-owned devices or by looking at your device’s web activity through its own wi-fi connection, though. Even if Skype doesn’t reveal your messages, the wi-fi network or the device might spill your secrets.

Skype for Business has been replaced by Microsoft Teams, which leads us to…

Can your boss read messages on Microsoft Teams?

Microsoft Teams does encrypt messages at rest and in transit, according to its pricing page, but the Teams administrator can still access your account. Your boss may or may not be the administrator, but requests could still be made to read your messages.

Can your boss read text messages?

If you’re using a work phone, then it’s entirely possible that your boss can access texts, private messages, and any app or internet activity on the device.

If you’re using a personal phone, then your boss wouldn’t be able to read your SMS text messages sent through traditional cell towers. However, anything sent through the workplace wi-fi network might still be trackable. This includes email, VoIP calls, video chats, and so on.

If you want to use your phone while on a break, consider turning on your mobile data to avoid your private conversations being recorded at work.

How to avoid recording private conversations at work

Everyone’s been in this situation at some point or another. I’ve expressed private sentiments about the workplace that weren’t flattering only to find out my messages might not have been private months later.

Don’t put yourself in a position that forces you to wonder if you’re being watched. Follow this checklist instead to give yourself peace of mind.

It’s a surprisingly long checklist for something as simple as having a private conversation, but crucial for your privacy. 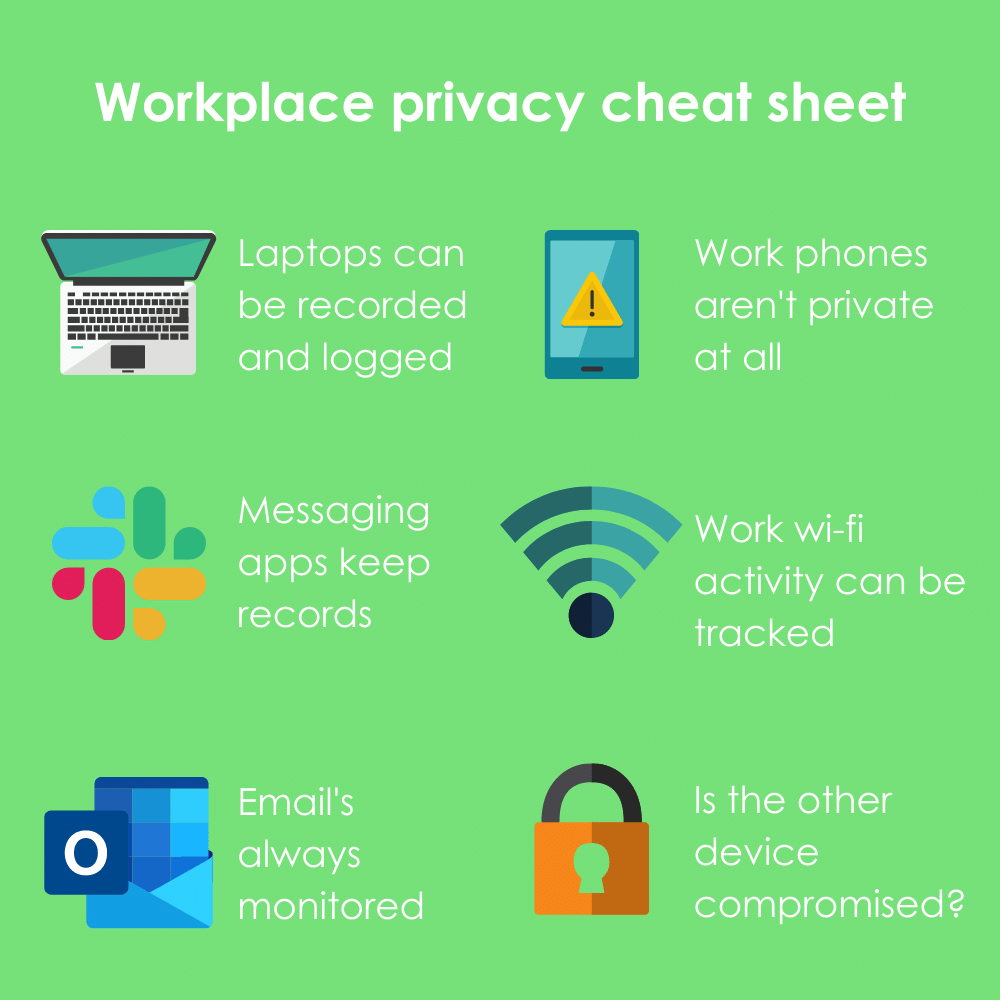 Years ago I worked in an extremely toxic workplace. The CEO was absent all the time, made things worse when he was there, and liked to watch his employees compete with other for his favor. Unsurprisingly, some of us didn’t like that—so we regularly riffed about it through private emails between personal addresses on our personal devices.

The employer didn’t have a sophisticated setup (despite being a tech investor), but that didn’t stop him. He encouraged the other team leader to skulk around the office to read other people’s computer screens. I saw this team leader trying to spy on me in the reflection of my screen. Not subtle, but it was clear that Big Brother was watching.

In another situation, a coworker and I were riffing about disrespectful behavior from another team member. She logged on to the weekly team video call, accidentally shared her screen with the whole team, and then walked away to get her tea. Even though we were both justified in venting privately, it probably didn’t look that way to anyone who saw the conversation.

Human error can get you in hot water even if you have the moral high ground.

The lesson: Communication is—at minimum—a two-way street. Once you put written words out there into the world, you don’t usually have control over where those words go. It doesn’t matter if you’re in the right because that’s not how human brains work. Think about how people will feel if they read whatever you’re about to write, because that’s how you’ll be perceived.


Remember that the next time you’re about to type a real zinger in your “private” chat.