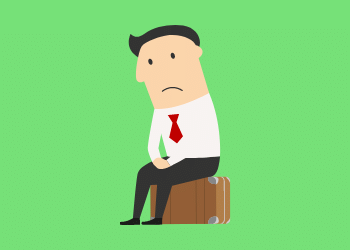 I was fired from my first job after college. This is what I learned.

Job loss is one of the five most stressful life events that can happen to us, and recent graduates are particularly prone to it. I was fired from my first job after college and can tell you that it’s no joke.

I can also tell you what I’d do differently and how to find a job again, looking back on it all with 5 years of reflecting and experience since it happened.

Here’s what you need to know.

Take some time to process being fired

The day I was let go from my first job I didn’t miss a beat. I even convinced myself that it was just a speed bump because I had been planning to leave anyway. In fact, I already had an interview scheduled for the following day before being let go.

But when I went home, it really started to sink in. I stayed home the next day aside from that interview as well as the day after that, realizing that I’d be unemployed after college.

The other team leader graciously announced that I had been let go, in my absence. The owner didn’t even give me a severance package. He forced me to come back to work for two weeks after the humiliation of being let go. He barely paid a living wage and knew that I needed the money.

It turns out that being fired hits people harder when they have fewer financial resources. Recent graduates fall into that category more often than not.

I did eventually land a new job, but it crashed and burned within 2 weeks. The owner had no idea what he was doing, and—even though I didn’t realize it—I was sabotaging myself through my attitude about being let go. It wouldn’t have lasted even if I was in a good state of mind, but then I probably would have avoided the role in the first place if I had been more stable.

My grieving process moved from “shock and denial” to “anger,” but I was the last person to realize it.

That person ended the business relationship too, and I stayed unemployed for another 8 months.

The takeaway: I was so focused on getting another job that I didn’t stop to realize how badly I’d been wounded. It killed my chances at getting hired anywhere for a long, long time. 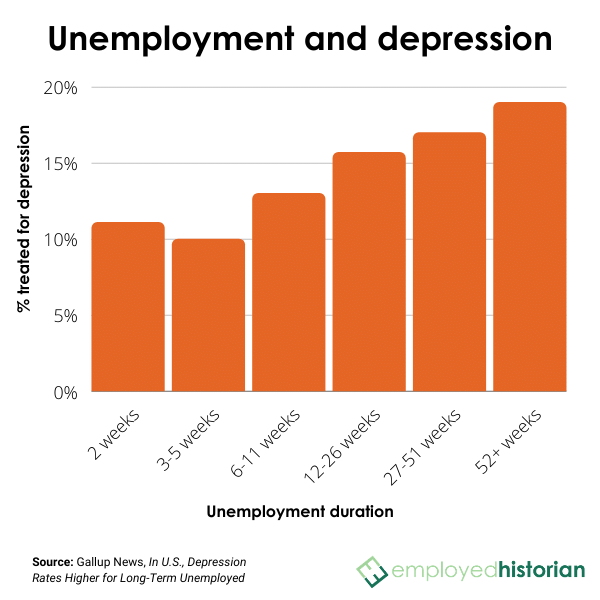 It turns out that 20% of Americans unemployed for a year or more reported depression before the pandemic started. According to the American Psychological Association, that number has increased to a range of 27-31% since the pandemic began.

You need to give yourself breathing room to figure out how you really feel about being fired from your first job after college. If you don’t confront those raw emotions then other people will be able to read you like an open book—and they won’t like what they see.

It’s natural to feel betrayed, dishonored, and discarded when you’re fired. But showing that wound to your network or prospective employers will come across as highly toxic, ruining your chances at finding a job through them.

Separate your identity from work

I’ve always rolled my eyes at people who say “you are not your job.” I still do sometimes. It always sounded like an excuse that some lazy person made to avoid working late.

I put my heart and soul into my job, just like I did in grad school. I came in early, stayed late often, and happily put in unlogged overtime to move the company forward. I was the star employee and I brought on all of the most successful employees.

And I was let go without a second thought.

My reaction was delayed, but when it all sunk in it was like being buried under a pile of bricks. That’s common for people who tie their identities to their job, according to the experts. Being fired from your first job after college also means losing other things.

Just like other workaholics, I lost my sense of worth the moment the job was pulled out from under me. I was a work-first person who couldn’t find a job after college, which made me feel like a complete failure.

What I didn’t know is that building your sense of identity and self-worth on a single aspect of your life just makes your self-esteem that much more fragile.

How to create a healthy personal identity

Figure out who you are without your job. It has always seemed so obvious to me that people need to define themselves as individuals instead of one half of a romantic couple, but I never realized that I had to define myself independently of my job, too.

It’s the same concept in a different context.

Being a hard worker and dedicated to your craft are still excellent traits, but now I see them as a way to pursue excellence for myself and to serve my larger goals of spending time with my partner and becoming financially independent. My life after college improved significantly, as a result.

I also rekindled other interests that had fallen by the wayside in my quest to become king of the career hill.

Pro tip: While it’s not the main point of rebuilding your identity after being fired, there are subtle benefits for your future work life. Picking up hobbies, visiting friends, and trying new stuff helps you bring new perspectives and ways of thinking into your life.

Work is still a big part of my identity these days (it comes with the territory of creating a career website), but I understand that it can’t define my personality all on its own.

People without a support network suffer the most from job loss, and recent graduates are already at risk of post-college depression. It gets even worse for people who blame themselves for being fired or let go.

That’s why it’s so important to reach out to your friends and family for support. Losing your job feels shameful but I guarantee that the people who care about you won’t see it that way.

When I was fired from my first job, I didn’t tell anyone at first. I waited a little while to tell my parents, and many, many months to tell my friends. It was too shameful to have put everything I had into that job only for it to be taken away, like being told to sit at the kiddie table again. 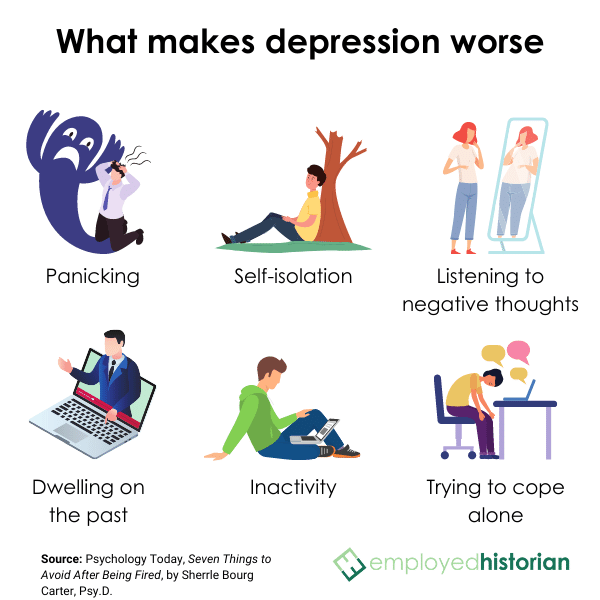 Psychology Today says these things worsen the emotional toll of job loss. I did every single one of these things without even realizing it.

I made everything worse for myself by making all seven of those mistakes, and it took me years to recover emotionally (4-5 years).

If you aren’t already living at home after college to save yourself some serious cash, then now might be a good time to think about it. Having your parents and some old friends in the area could make all the difference in recovering.

Reach out to people discreetly

Being fired from your first job after college leaves you with this feeling of overwhelming shame, but listening to that shame is exactly what makes it worse.

Unfortunately it doesn’t just go away because we want it to. The unemployed report more mental health challenges than the employed, and many people never report anything.

That’s why it helps to reach out to people one at a time.

This isn’t about dramatic announcements or posturing on social media. Leave that behind. Instead, start one-on-one conversations with people you trust. This is how you find the support you need without broadcasting your job loss—and all of the negative emotions that come with it.

Put your pride in the back seat and let people know what’s going on in your life. Getting back to a sense of normalcy with the people who care about you is essential.

I didn’t do that, but I wish that I had.

I know it’s embarrassing. I know it feels like failure. But cutting yourself off from others will only make it worse. Confide in people and get back to your “normal” with them.

There’s more to the issue than recovering from the attack on your mental health, but that is the most important part. It underpins everything else that you do afterward.

Once you’ve started to recover—and only then—should you start pursuing a job again (otherwise you could very well sabotage most of your opportunities, like I did). 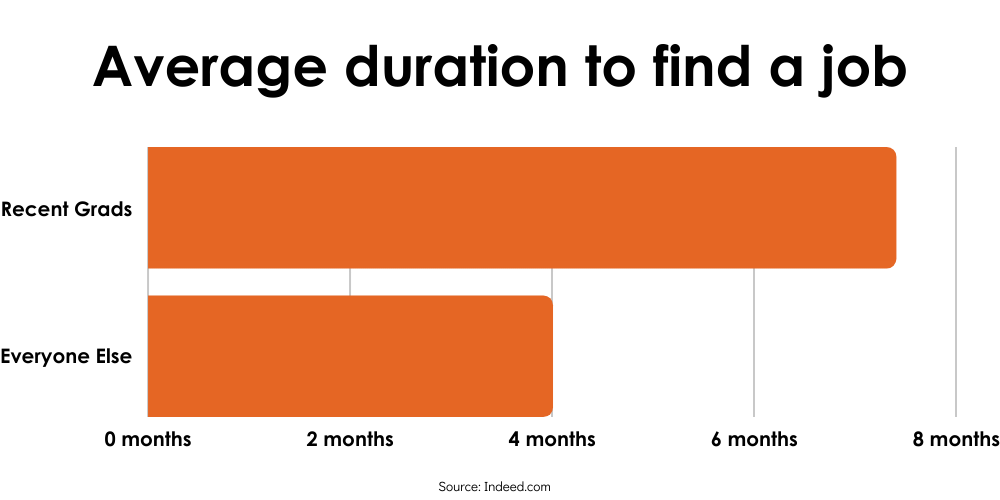 Pro tip: Job searching as a recent graduate can be a soul-sucking challenge. Indeed reports that it takes 7.4 months on average to find their next job. However, a 2014 study from Gallup Research found that people stop believing that they’ll find another job soon the longer that they remain unemployed. 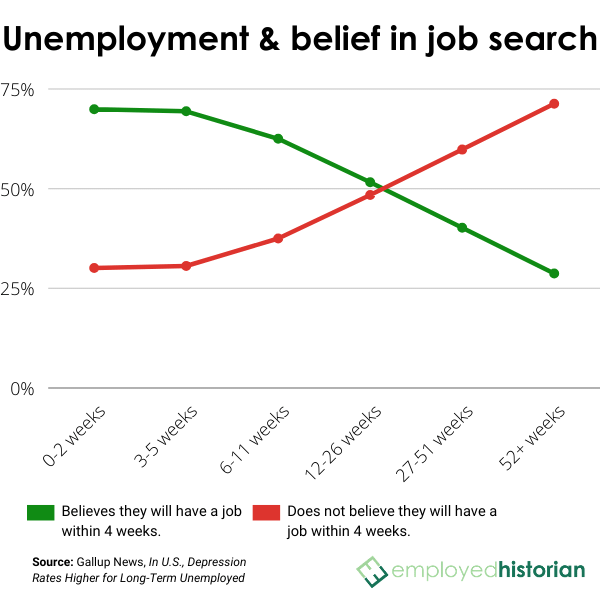 Notice how the people who believe they’ll find a job soon are split almost perfectly in half between 12 and 26 weeks of unemployment? That’s still not as long as the average time it takes for a recent graduate to get hired, so you can expect feelings of discouragement.

Those feelings are natural, but I’m also telling you that a long job search is also perfectly natural—especially when you’ve been fired from your first job after college.

Looking back on losing my first job, here’s what I’d recommend.

I also have a 7-step process for recent graduates to land their first job after college, but give yourself a bit of time to heal before getting back in the saddle if you have the option.

Speaking as someone who went through this before: you won’t regret looking after yourself before looking for another job. 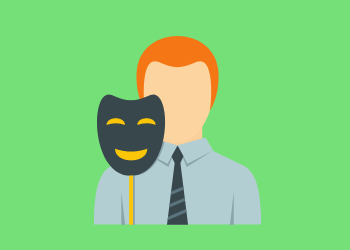 Are you working for a career predator? Look for these signs

There are bad bosses, manipulative managers, and toxic coworkers… but career predators are the ones who really sink their teeth into you and hold on...